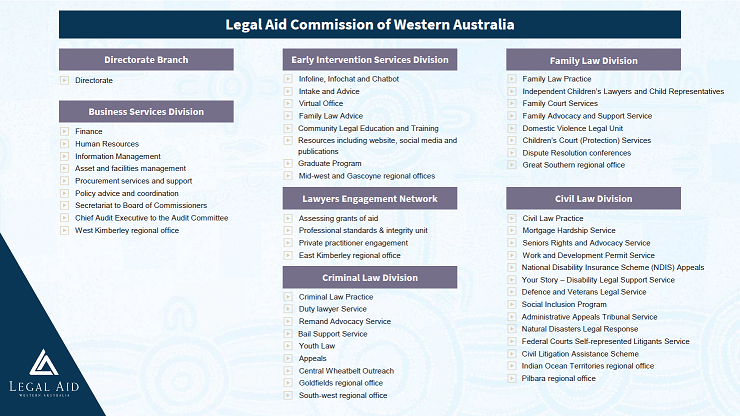 The current management structure was implemented in July 2021. Lawyers on the Executive Management Team have current certificates to practise law in WA. The Acting Director of Business Services is a qualified Certified Practising Accountant (CPA).

This picture shows the core sections within each division of Legal Aid WA (click to enlarge). Profiles of members of our Executive Management Team are included below. More information about the work of each division is included in our annual reports.

Graham Hill started as Director and CEO of Legal Aid WA in May 2018. Graham was the Chair of National Legal Aid from 2017-18. He served as CEO of Legal Aid Tasmania from 2014-18. Before that, Graham spent three years as Deputy Secretary, Courts, at the Department of Justice in Victoria. He was Director of the Legal Branch at the Victorian Department of Premier and Cabinet for eight years.

Graham worked for 14 years as a lawyer in private practice and was a partner in a Melbourne law firm. He also served as an Associate to a Federal Court judge.  Graham has a Bachelor of Economics and a Master of Laws from Monash University. He also has a specialist doctorate in law from the University of Melbourne.

Lee commenced working at Legal Aid WA in November 2003 and has held the position of Chief Finance Officer for the past 10 years. She is a qualified Certified Practising Accountant and is a member of CPA Australia.

Since May 2017, Lee has also been the Acting Director of Business Services. In this role, she is responsible for the delivery of corporate services to support the operation of all the other Divisions of Legal Aid WA. Additional responsibilities include overall agency financial management, reporting to external stakeholders, policy advice to the Attorney General and providing a secretariat at Legal Aid Commission meetings.

Julie began work at Legal Aid WA in 1985 and has established herself as a recognised leader in representing children in protection and care, family law and criminal law matters. In 2009, Julie was awarded WA Woman Lawyer of the Year in recognition of her commitment to her clients and the legal profession.

Julie has an active role in the development of law reform and policies regarding child protection, family law and family violence. She has a special interest in improving court processes, information sharing and interagency collaboration, to achieve better court outcomes for children and victims of family violence. In 2010, Julie completed a Churchill Fellowship researching the integration of Family Court and Children’s Court services in other countries. From 2011 until June 2021 she was the Director of Legal Aid WA’s Family Law Division. She has served as Chair of the WA Family Pathways Network and currently serves on its Steering Committee.

Julie is a Convenor of the Family and Domestic Violence Advisory Network and a member of working groups overseeing the information sharing protocols between courts, the police and other government agencies regarding child protection and family violence issues. In 2021, Julie was appointed as a member of the Family Law Council, a body that advises the Commonwealth Attorney-General of family law matters. In July 2021 July became Director of the newly formed Early Intervention Services Division, responsible for client intake and triage, discrete family law and virtual office advice services, and community legal education.

Colleen was admitted to practice in NSW in 1988 and to practice in WA in 1992. Her journey in law has taken her to different parts of Australia, working in a range of environments including a large-scale national firm in Sydney, regional offices in Port Macquarie and Busselton and a boutique family law firm in Perth. Colleen joined Legal Aid WA in 1996 as a children’s representative and went on to set up Legal Aid WA’s Alternative Dispute Resolution Program in 2001.

She was  the head of Legal Aid WA’s Client Services Division from July 2008 until June 2021, responsible for client intake and assessment and creating clear, positive pathways for clients requiring legal assistance. Colleen is a qualified Independent Children’s Lawyer, Arbitrator and Collaborative lawyer with a longstanding background and interest in family law.

Helen commenced her legal career at Legal Aid WA in 2005 and has practiced predominantly in criminal law. In 2011 Helen was appointed Acting Solicitor in Charge of the Fremantle office, before going on to manage the Legal Practice Development Division from 2013 to July 2021. Helen was also responsible for establishing Legal Aid WA’s Virtual Office service in 2019.

Helen is passionate about resilience and wellness in the legal profession, and the development and mentoring of staff. Helen has managed graduate program and Country Lawyers Program, and was responsible for establishing wellness mentors at Legal Aid WA. Helen is an outstanding trainer and educator, developing and delivering graduate training for the Australian National University and community legal education for Legal Aid WA.

Gemma joined Legal Aid on 1 February 2021 as the Division Director, Civil Law. Gemma was previously the Managing Solicitor at the Consumer Credit Legal Service.. She obtained her  Bachelor of Laws with Honours degree at the University of Notre Dame Australia, and brings private practice and in-house experience gained through various law firms in Australia and the United Kingdom. She also holds a Bachelor of Science majoring in Psychology with Honours.

Gemma is an effective leader who has anticipated change, defined strategic choices, fostered a positive culture and pro-actively shaped the organisation’s future. She enjoys delivering quality services and supporting and strengthening the business units she leads.

Maureen started working at Legal Aid WA in 1993 and has held a number of senior management roles including Manager of Assignments and Client Services and Director of the Criminal Law Division from July 2008 to July 2021.

Maureen takes an active role in promoting and supporting best practice initiatives. She is a member of a number of working parties and reference groups, including National Legal Aid working groups. Maureen is National Legal Aid’s Statistics Consultant and is interested in how client data can be used to promote evidence-based decision making. She is also interested in optimising technical solutions to create efficiencies, in particular to reshape time-consuming transactions and manual tasks to reduce administrative costs. Maureen is currently responsible for Legal Aid WA’s digital transformation project.

Jane joined Legal Aid WA in 1994. She has held a number of senior roles, including acting Solicitor in Charge of the Magistrates Court Section.